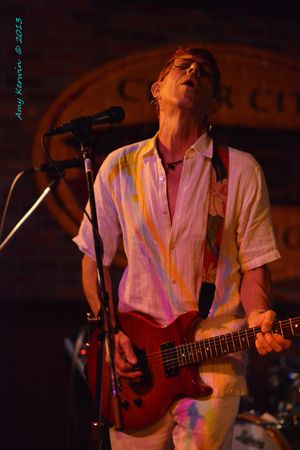 A guitarist and whisky-voiced singer who has knocked around the Crescent City long enough to have been rained on at a Saints home game, kid red creates a spicy electric music;  a punky roots rock, seasoned with swing and salsa and reggae .

On stage he's been described as "that Iggy Pop blues guy," furtively prowling back and forth while his guitar stings, then purrs, then growls,then bops.His vocals serve up the jagged edges of his soul in the true Big Easy tradition, Tom Waits with an overhead cam and glasspacks and a pocket full of worry and pain.Billy Pilgrim music, unstuck in time.
New Orleans has a gris gris connection with her musicians. When they first become involved in music there they fall into it, though like kid red, few realize it at the time. They go on their merry way, wandering off to here or there until the gris gris calls them back and says, "let's hear what you learned."
What they learned is what New Orleans blues great Eddie Lang once told a young Skip "Hoochie Coochie Man" Easterling, who told it to kid red, "just let 'em hear what's in your heart."